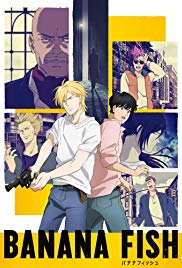 * Based on an action shoujo manga by Yoshida Akimi. 1973, Vietnam - an American soldier goes mad and guns down his buddies. Since then, the only words he has uttered are "Banana Fish"... Nowadays, in New York City, police investigate a series of puzzling suicides and a dying man gives a charismatic young gang leader named Ash Lynx a vial of a mysterious substance.