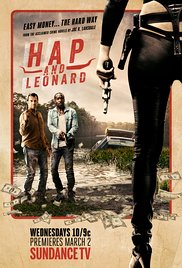 Hap Collins is a white working class laborer who spent time in federal prison as a young man for refusing to be drafted into the military and serve in the Vietnam War. In his late forties, he is often haunted by the various unpleasant jobs he's held over the years such as working at an aluminum chair factory and working the East Texas rose fields. The two now work for the former police officer turned private investigator Marvin Hanson. Hap tries his best to avoid violence and also tries his best