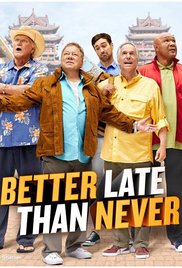 This hilarious fish-out-of-water comedy/reality show follows cultural icons Henry Winkler, William Shatner, Terry Bradshaw and George Foreman on their greatest adventure yet. Deciding it's Better Late Than Never, these four national treasures embark on the journey of a lifetime, traveling across Asia on their own with no schedule and no itinerary. The only "help" will come from Jeff Dye, a young, strong, tech-savvy comedian with an agenda of his own - who isn't above leading the men off track. E